This document contains descriptions of new features in Basware Purchase-to-Pay 22.2 and its maintenance releases.

Earlier it was possible to see contract spend of orders in the purchasing currency and the contract’s currency, as in the image below.

Now, users can also see contract spend in the company currency and the organization currency.  Users can use the column menu to select which columns they want to show or hide in the Orders table to best fit their workflow.

To use this feature, you must first request for the contract spend collection feature to be enabled. For more information about contract spend for purchase orders in Purchase Professional Tools, check out our 21.6 new features here.

Several improvements have been made to the Contracts API:

Information on this and all the available Basware APIs can be found here.

Sometimes all available 55 EXT tables are used for storing customer data and consultants need to create extra tables directly in the customer database to support additional data needs. Now it is possible to access and maintain these extra tables in Data management > Table maintenance. New edit views have been introduced for each of these extra tables. Customers with existing extra tables that were added through the legacy interface can now choose the appropriate edit view for the added table and maintain the tables in Data management. If new table configuration needs to be done, the consultants must first create the table in the database and then configure the table in the data management user interface.

New tables can be created with any of the below table names:

To set the filter, the user inputs the desired range in the quick filter of the column menu. By then pressing ENTER, the grid in the background is filtered accordingly. Both number and letter values are supported, such as “100-300” or “A-F”. The range can also be open-ended. For example, " -D" shows results with first letter A, B, C, or D. “100-” shows all results greater than 100.

Filtering by ranges can be done for all invoice, spend plan, accrual report, and data management grids. 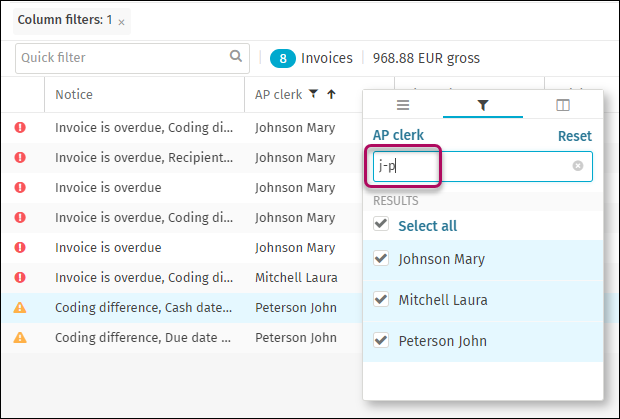 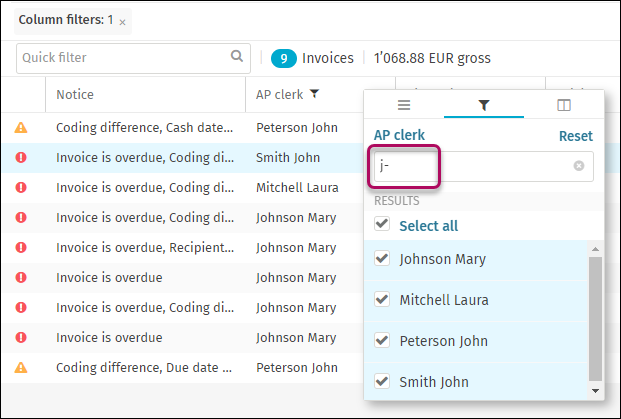 Keyboard usability in editable grids, such as AP Pro’s coding grid, has been enhanced.